If you're looking for the best individual performance in the Princeton-Harvard football game from Saturday, perhaps it came from Patrick Tewey.

Okay, it might be a stretch to give that distinction not to a quarterback or receiver or linebacker but instead to a photographer. Then again, did you see the picture that Tewey took? 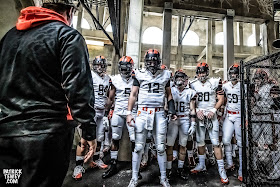 That's extraordinary. That's not a painting, although it looks like one. It's a picture that Tewey took at Harvard Stadium Saturday.

Look what you have here. You have Princeton's players, with their unquestioned leader John Lovett front and center, and you have head coach Bob Surace.

Yes, Patrick made it better in Photoshop, but still. This is one of the best pictures TigerBlog has ever seen.

As for the game itself, this is the one Princeton fans have been waiting for, and in the end it was the most impressive of the season so far.

Princeton's 29-21 win at Harvard was different than any of the five that preceded it this year. Added together, and Princeton sits at 6-0, with four weeks to go in the Ivy League race. The games go in this order: home with Cornell, home with Dartmouth, at Yale, home with Penn.

Dartmouth, like Princeton, is 6-0, but there's no point in talking about next week's game now. The Big Green host Harvard this weekend, and so keep in mind these scores from one year ago: Cornell 29, Princeton 28 and Harvard 25, Dartmouth 22. For that matter, Princeton lost all four games last year to the teams it has remaining on its schedule.

In other words, there's a lot on the line this week before anyone can consider next week. And for today, just focus on last week, with the win over Harvard.

Princeton won its first five games with a familiar formula - the blow out formula. Get up early. Never let it be a game.

Princeton's first five games saw the Tigers score at least 28 first-half points, passing 30 in four of them. The starters didn't have to play a down of the fourth quarter, and the outcomes were never really in doubt past the middle of the second quarter.

That game was this past Saturday.

Also, the Princeton offense got most of the attention for being the top scoring and top yardage producing unit in the FCS. The defense received much less attention, but that group was ranked second in scoring defense, which is hardly shabby.

This past Saturday at Harvard, it was the defense that carried Princeton.

The Tiger D started out by going punt, punt, punt and interception on Harvard's first four possessions. Princeton scored a TD on its first, with a nine-play, 68-yard drive, and it looked like this was going to be business as usual.

Harvard then threw a bit of a blanket on the Tigers, holding them to just a field goal in the first half, and when the Crimson finally broke through with a TD of their own, the momentum was definitely with the home team at the break, even if Princeton was up 10-7.

Harvard would get the ball three times while the score was still 10-7, and the Tiger defense would not allow a point. There would be three sacks during that time, by three different players - Mark Fossati, Delan Stallworth and Tom Johnson.

Princeton then scored a touchdown to go up 16-7 when the extra point was no good, and then Harvard's next two drives were a fumble and a four-and-out, when the Tigers stopped the Crimson on a fourth down at the Harvard 24.

Princeton then scored to go up 22-7. Yes, Harvard added two late touchdowns, but the game would have been much different had Harvard gotten the lead in the third quarter. Instead, it was all Princeton D.

It was a team effort, of course, as it always is. For instance, Princeton had seven different players with at least five tackles.

The offense got some big plays from its stars too. Jesper Horsted caught 10 more passes for 126 more yards and another touchdown, which would be career numbers for most. Lovett threw for a score in addition to his rushing TD, and Charlie Volker had 94 rushing yards, including a big 49 touchdown run in the fourth quarter.

In the end, it was a big win over a good team, and a huge rival, in that team's stadium. It came on a day, for the first time all year, when everything did not come easily.

It's the kind of win that championship teams have to have.

The one the Tigers just cleared, however, was no gimme.
Princeton OAC at 1:29 AM